No, I'm not dead, just got lazy again. I have an excuse though, I gave blood recently! The turn out was pretty low. Kinda depressing.

Depressing like my predictions for the future but we'll get to that in a second. 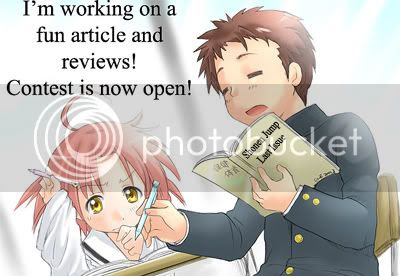 I'll post photographic proof of such later on. Every blog post until the contest's end will include a minor contest update from now until July 4th. This contest will be open for ANYONE to enter. I will ship to any location ON EARTH! (That can in fact be reached by some postal service.)

Although highly unlikely, I reserve the right to cancel this contest at any time. This contest is open to any person with a mailing address, prizes will be shipped anywhere! Winners' names will be posted here at Blog Of A Heretical Dub Lover but mailing addresses will be provided only to professional postal staff of my choice. No one else will be told.

Winners' addresses and E-mail addresses will be erased once the prizes have been shipped. Non-winners' names, E-mail and mailing addresses will not be given out to any one and will be erased when the winners have been confirmed. Non-winners will not be contacted, spammed or harassed in any way. I am not interested in ordinary humans! I reserve the right to retroactively add new rules in the unlikely event that they become necessary.

One entry per person/mailing address.

The DVDs are Region 1.

The DVDs include both English and Japanese dubs, English subs and a commentary track. And you might even get an iron-on patch. Of course, you're also getting this:

Sexy girls, sci-fi alternate history plot and plenty of action with a healthy dose of fanservice. Want to get all of that? Send an E-mail to my E-mail with Strike Witches Contest in the subject line. Include your name and address. Also, please post a comment with your thoughts on this contest or my future predictions! There will be 3 winners so you've got a great chance of getting some free anime!

Now, on to my predictions for the future.

First, VIZ will drop the Shonen Jump magazine, leaving us with no monthly manga anthology magazines of note. I believe this will happen before the end of next year, possibly before the end of this year. Why? Well, VIZ layoffs mainly and the growing trend in that direction in general. VIZ already killed Shojo Beat and Yen Press recently made Yen Plus a soon-to-be online magazine rather than a physical media title.

I believe the trend is clearly against Shonen Jump's continued publishing in the US. I have seen it removed from store shelves in numerous places, primarily Wal-Mart, providing anecdotal evidence.

My second prediction is that Bandai Entertainment will cease to exist. It may hold up until after the new Haruhi releases come out (they recently announced Haruhi-chan and Churuya-chan shorts) but I wouldn't take bets at this point. I've been convinced they were going downhill for quite some time, in fact I started thinking about it right after they started doing more sub-only. I thought that would be a coffin nailer. 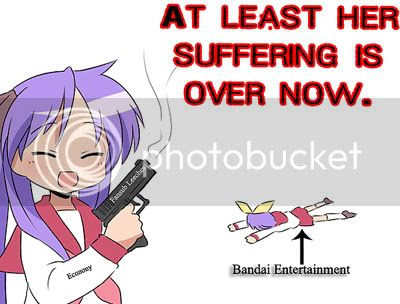 My evidence? Well, they've become the sultans of delaying tactics, with virtually every anime they've released since last year being delayed multiple times. We've seen their number of licenses drop significantly, their sub-only catalog grow by leaps and bounds and now they are apparently selling off some of their licenses to Section23! Although these were formally Bandai Visual licenses, Bandai Entertainment did more or less take over Bandai Visual's holdings when it died. Clearly these license were sold for quick cash. (To fund the Haruhi franchise or a mysterious other new license? Only time will tell!)

Frankly, I think a combination of the fansub leeches and the poor economy (which the federal government keeps insisting is getting better) is responsible. I believe that with several of their licenses being series with strong fansub communities (and thus larger leech populations) and with the drop in people's personal incomes due to job loss, higher taxes and general economic depression, they're simply destined to die. I fear for the future of all of the companies but they are currently the most vulnerable in my opinion.

While I believe they will complete their work on Haruhi-related projects, I'm not sure about anything else. By next year's end, possibly sooner, I think we'll be talking about closure plans. I believe Bandai Entertainment as the US branch of Bandai Namco Holdings, will not see the 2012 elections.

My third prediction: I have a feeling that Section23 will announce another English dubbed production before the end of the year. This is just a hunch. Evidence suggests they are recovering from the ADV fragmentation trauma, which surprises me a little (though they are still in need of outside capital, suggesting they remain vulnerable to death.)

Well, that's it for this blog post! I'm Richard J., your Navigator, signing off!

Look for next week to make up for my laziness from this week! No lies!