The Perils of the PS3 and Funimation's New Year Roll Out!

Ah, Christmas was good for me and I hope it was for all of you who celebrated! And of course, if you didn't celebrate Christmas, I hope you had some equally enjoyable celebration, holiday, party, festival, pagan ritual, cult event or whatever!

Just thought I'd check in to talk about a few things.

First, on a personal note, I got a lovely PS3 for Christmas! It's great, so great in fact that I've been almost relentlessly playing on it since I plugged it into my TV. It also kinda creeps me out just a bit. I was born in 1982 and originally played freaking Nintendo. This thing is so far above the original NES console that actually thinking about the leap in tech is kinda dizzying. (Am I the only one who ever thinks about this? My first computer used 5.25 floppies for crying out loud!)

The PS3 has more space on it's hard-drive than my actual computer does, can access the 'net through the wireless network in my house and the graphics are just amazing on the games I've been playing. (Got Ghostbusters, Dead Space and Silent Hill: Homecoming and bought Devil May Cry 4 myself. All fun by the way though I have sort of a love-hate relationship with Devil May Cry.)

Anyway, I've been a slave to the sleek black gaming deity for a while but I'm finally starting to disconnect more.

Though I'm also having an extremely strong desire to write brutal and bleak Dead Space crossover with various anime fanfic. Let's not dwell on what that indicates about my psyche.

So speaking of anime: An important news item is that Funimation, their name be praised by all English dub fans, is doing a week-long Roll-Out Riot starting January 4th. Yes, I know you know but maybe you don't know what I know you know or someone else doesn't know what we know that we know, you know? (I've always wanted to write something that pointlessly wordy and confusing. ;) )

Next week I'll be showing up every day to comment on the choice of show. Hopefully I'll even post something semi-interesting!

Till next time my friends!

It's me again, you're humble Richard J., hoping to snag a little delicious Christmas dinner soon. (God, I can smell the ham cooking right now and both a pecan and a sweet potato pie were made last night! DROOOL.)

Before I eat or go through the loot for this year, I wanted to wish all of my readers a wonderful time today and all the way to New Years. May your time be blessed and fun! 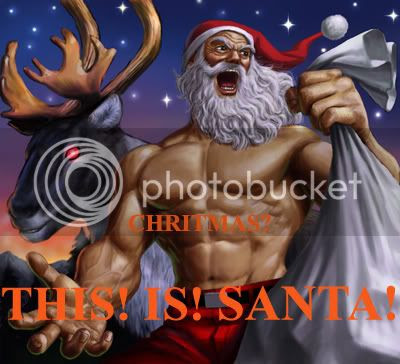 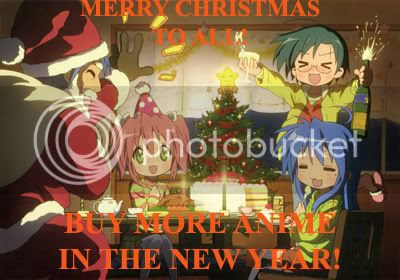 Just remember this: Whether you are a person of faith or a non-believer, this is the time to set aside hate and try, if only for a brief moment, to find comfort, joy and love with our fellow human beings. I hope that everyone out there is finding a bit of peace this year and that all of you my readers will stick with my unreliable self in the New Year to come!

Hi ya'll and welcome to another epic fail blog entry! I'm you're host, Richard J., wishing he were half as cynical as Akira Kogami as it would help to keep his expectations down.

Then again, with an English dub cast this nice, who needs cynicism?

Yes my friends, Funimation has done it again! Yesterday they announced the English dub cast for Strike Witches and ooh boy, they picked some amazing talent for it. (Clink the link for the trailer!) 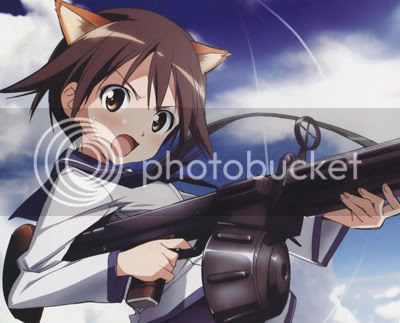 Excellent choice and truthfully the one I was hoping for. Cherami has a natural cuteness to her voice that she's used before as Makoto in Sasami Magical Girls Club and as Patty Thompson in Soul Eater. However, as her work in Bamboo Blade as Tamaki Kawazoe and in Strain as Lottie shows, she can handle a hard-hitting action girl.

Yoshika Miyafuji is a mix of cute and sweet with an ability to kick butt so Cherami's a perfect choice. 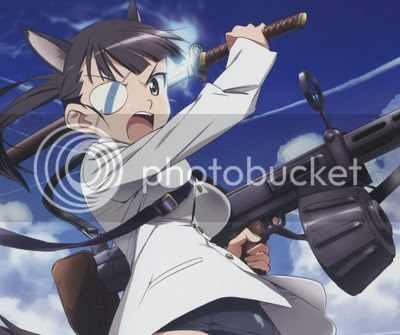 Well this was a surprise. Kira Vincent-Davis is best known to all of us as an ADV cast regular. Hire her for instant awesome. Guess Section 23's dubless state is sending talent fleeing to Funi. And thank God for that.

Kira Vincent-Davis has a natural strength to her voice as well as an ability to play a subtle gentle quality. This is perfect for Mio Sakamoto who is stern but fair, often coming across as a fatherly character. (At least this is my opinion.) I'm expecting something between Ruri of Martian Successor Nadesico and Najica of Najica Blitz Tactics for this role. 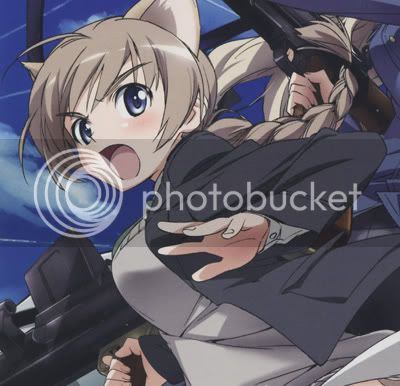 Kate Bristol is a surprising choice for Lynnette, at least to me. I was actually expecting someone more like Carrie Savage. However, I do believe Kate is a good choice.

Her work as Kisa in Fruits Basket shows Kate can really crank up the woobie factor when she wants too. That's important to Lynnette's early appearance and a gentle nature is needed later as well. 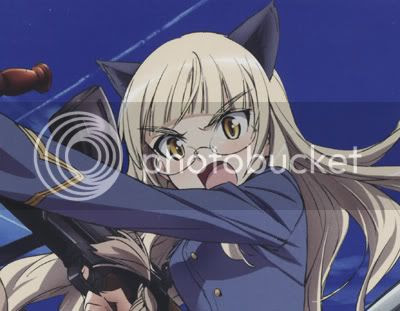 Oh hell yes. I just have a feeling this is perfect casting. Jad Saxton has a great stern voice she can use but also sound soft with, like with Masako in Ghost Hunt. I have a feeling she's going to steal scenes. 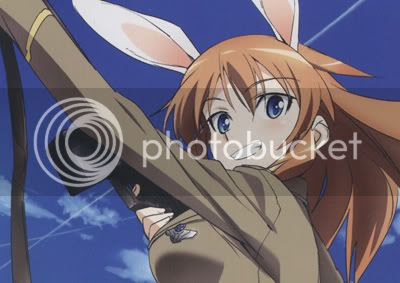 Inspired casting choice. Jamie's voice is very warm but also has a quality that gives her that tomboyish edge that makes it possible to imagine her working on a Striker engine. Shades of Meg from Burst Angel and Integra Martel from Solty Rei? I'm looking forward to it. 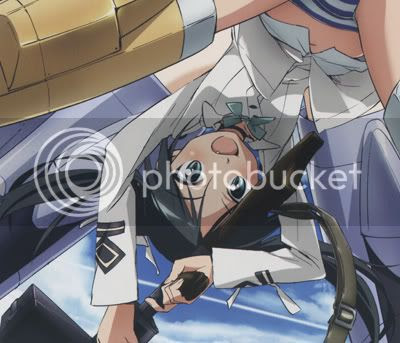 If I were still only familiar with Trina Nishimura from roles like Shigure in Kenichi: The Mightiest Disciple and Akira in School Rumble, I'd be going "what the hell?" right now. Fortunately, I've been exposed to her work as Nadie in El Cazador de la Bruja. This actress has RANGE. Seriously, she can sound like a stoic badass or a cutesy girl without a problem. Hope she does lazy troublemaker well! 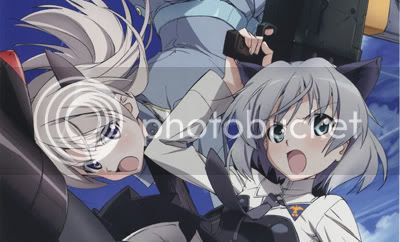 Jennifer Forrester is a name I haven't heard before so I can't really even begin to speculate. Sanya's not a chatter box girl either though. Singing talent is important here as well as the ability to sound perpetually a bit tired.

To be honest, I expected Caitlin Glass to be playing Sanya! Rather surprising to make her Eila, a character with a bit of tsundere in her if you ask me. (Which you didn't.) I think her work as Triela from Gunslinger Girl might be informative of how she'll sound as Eila though as there's a motherly aspect to both characters.

My head does tilt a bit though. Someone in casting must be sick of the folks whinning about Funimation's casting choices being predictable. (Which begs the question: why is consistency of quality a bad thing?)

Last three, one could argue I saved the best for last! 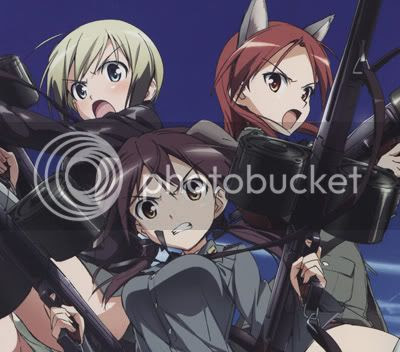 Did someone order a plate of awesome served with a side of shock? Apparently so as we have Stephanie Sheh cast as Gertrud Barkhorn! Mainly an LA actress, Sheh is A-list talent in my book and capable of handling all kinds of roles. (I ask all of you to check her out as Nanoka in Koi Kaze, she's credited as Tiffany Hsieh.) Seeing her cast here is a bit of surprise considering her previous roles for Funimation have been pretty small parts. Also, Barkhorn is one of my favorites in the series.

For some reason I suspect the voice she'll use will be a little like how she sounded in Ultra Maniac playing Ayu Tateishi but a bit more serious.

Another voice actress we know and love, Luci Christian, will grace us with her voice to bring English life to Hartman. It will be interesting to see how her voice will jive with Stephanie's since both will be playing characters from the same homeland, the Strike Witches' version of Germany.

Somehow I expect Luci to make Hartman sound like one part Yukari from Azumanga Daioh and two parts Suomi Kitano from Diamond Daydreams. That might sound odd but Hartman is. . . well, she's not taking things too seriously for such an ace pilot.

Anastasia Munoz ends my exploration of the cast. She's another surprise though by looking at her ANN filmography she doesn't seem to be a newbie. Mina's VA needs to have a commanding voice and a good singing voice (trust me) and I hope this actress can handle it. I imagine she was cast knowing these things though.

Her casting is another I'm going to be watching to see how it comes out.

Well, that wraps this up. If you haven't already checked out Strike Witches, watch a few episodes on Funimation's Video Portal!

Oh, you noticed the Contest tag? Well, that's there because I'm going to buy 3 copies of this show! (Yes, I am determined to support this one like crazy.) One will of course be going on my shelves but that leaves two copies.

Hey everyone! I'm back and I'm sorry for the long delay in last posting! You ever have one of those days where you felt so filled with anger and depression that you didn't want to do much? Well, I had about 3 months of that. Still posted here and there on other sites but I really came close to leaving anime fandom entirely.

Fortunately (or unfortunately for those who hate me and want to see me leave) I've decided to stick around. If for no other reason than to annoy those that don't like me to death.

And with Funimation's plan to announce the English cast for Strike Witches today at their Funicon 2.0 live con/blog thing, I feel a certain rush of invigoration to talk about English dubs once again!

The 501st has one message to all the haters out there: 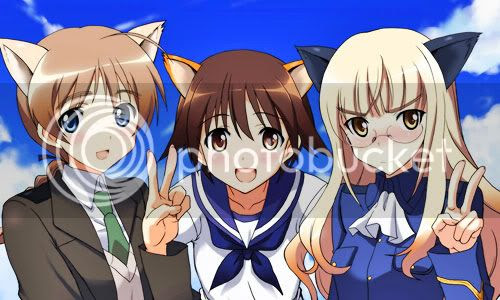 So after I find out what the cast is, I'll come back on here and post my thoughts on the selections! Hope you'll start joining me again my friends!

Ooh, also I should mention I'm going to start treating this blog like it's more of a fun thing for me personally. I was spending 10-15 hours trying to make perfect posts before (yes, I know, it looked more like 20 minutes tops) so hopefully I'll post a little more often.

If it wouldn't bother you few souls who actually read this joke of a blog, I might occasionally mention fanfic I'm trying to write as I plan to get back into that fun hobby.