Thanks and Dub Fears!

Hello everyone! This is Richard J., blog navigator, English dub lover and a sufferer of Anime Bipolar Disorder (ABD for short.) This blog has done what I never believed possible when I started it. It has broken double digits for followers! 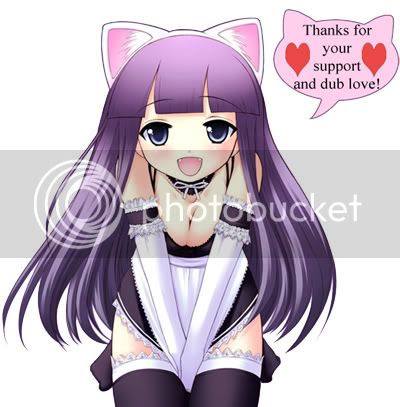 Uh, for my female readers, forgive the Hazuki service. I really couldn't resist using this image as part of my thank you. (Freud would likely have quite the explanation for this.)

Anyway, I'm very grateful to you my readers! Your faith in me and in English dubs moves my heart.

Now, onto some business. You've probably wondered why I haven't been ranting or at least mentioning sub-only decisions and new companies making them. The reason is I really do want to try and keep this blog somewhat positive/happy.

Still, something does need to be said about NIS America getting into anime licensing. (Old news is new to someone right?)

I was going to post a really insulting pic but instead, let me talk instead more about my fears and also my love for a bit. (This will be a LONG POST.) 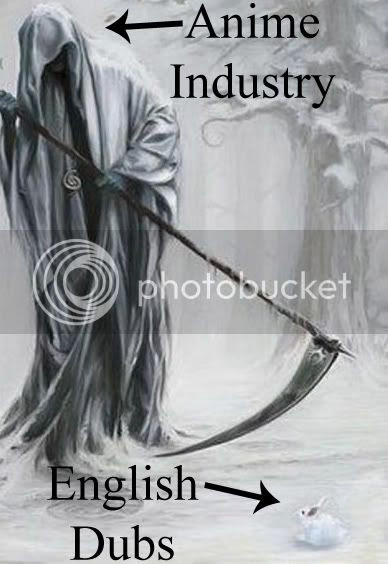 This is what I fear is happening.

Sub fans get what they want but for dub fans, we get, at best, only a fraction of what we want. I'm not really all that affected by the NIS licenses as I've not seen the shows but for fans who prefer English dubs and watched their licenses in Japanese, they're left in a bad place. Either they buy now and hope the get the chance to double-dip for a dub later, as some Dokuro-chan fans will soon be able to or they just don't buy it at all.

The sub fans and fans without a strong preference don't have to worry much. They have legal DVDs and subs. For the fan who prefers English dubs however, the options are spend now and hope you can spend again in the future on what you REALLY want, don't buy it at all and risk never getting a dub made in the future or just buy it as is and learn to live with not actually getting what you want out of the release.

The anime market without English dub fans is undeniably smaller and potentially less healthy. How do the companies hope to grow or even thrive on shows that have small audiences and lack a key marketing tool, the English dub, the only part of the release that can't easily be obtained online for free! The more mainstream audience is largely cut from the equation in this model. Plus price-wise, subs are beginning to go up in the cost to fans! Bandai Entertainment already charges more for Hayate and several other shows than Section23/Sentai/Fragment of ADV does for whole sets. NIS America also plans to charge "premium" prices: Toradora is planned to come out at $60 for a half season set if I have my info correct, approximately the same as the high range for Funimation's half-season sets. Many of Funi's sets come out for less though, they have several in the $30-45 range and a very few have started out at less. I think we all know that everything they release is bilingual.

Anime in Japan is also becoming more mainstream-oriented, though moe-haters won't admit it. Anime based on successful novel series, games and such are increasingly becoming the norm. This has the potential to greatly increase licensing costs.

I'm not angry at NIS America. I hope they'll be successful and start dubbing. At the same time, I'm not going to praise them for a job that to me and some dub fans is only half-finished. Fans talk up a good line for LE items but they've already failed in R1. The biggest problem the market has right now is the recession, the second is illegal piracy with both fansubs but most especially bootlegs and third is a failure to recognize who their real consumers are. We English dub fans are the real buyers.

We are not the enemy to sub fans. We are their allies! We want anime to be licensed, to be dubbed and to succeed!

I know, you're thinking "well duh" but when I say I love them I really mean something special by it. Ever since I was a about 4 or 5, I've watched cartoons. All of my life, I've loved the medium and never once did I think I should "grow up" or whatever. The voice of an animated character IS that character to me. When I watch an anime in English, I connect with that character.

I share her struggles, I hope for his success and I fall in love with them all.

It doesn't matter to me if it's a mecha drama like Evangelion, a harem show like Shuffle, a mind-bender like Noein, a girls with guns drama like Noir or the truly epic magical girl show that redefined the genre like Magical Girl Lyrical Nanoha. When I listen to an English dub, I fall in love with the characters and for however long that show lasts, I live alongside them on their adventure, sometimes wishing it would never end.

I can look at a show objectively after I've watched it but while I'm watching it, I try to just love the characters. To do that properly, I need an English dub.

So I can't hate the corporations for trying to do what they mistakenly believe is the profitable/right choice. I don't hate sub fans for having a completely different viewpoint than I do.

But I won't buy sub-only DVDs. I love English dubs. Without that special spark, I just don't enjoy a series as much as I could. 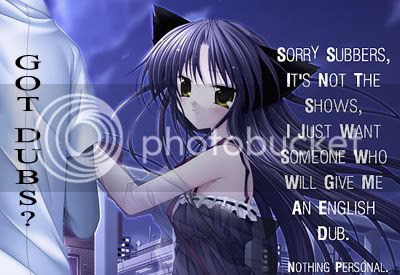 My heart belongs to the VAs who bring the characters to life for me as a person who lives and thinks in English! If I were Japanese, I'd love the Japanese, if I were French, I'd want a French dub. I want to share my love with NIS America but they have to show me the love first.

Hope I didn't freak anyone out with this one. ;) Also, thank you to Cliff who inspired a few parts of this post.